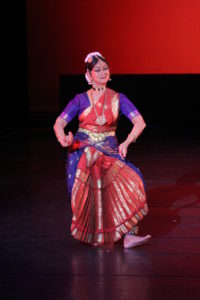 Bharatanatyam is an ancient classical dance form that was performed and nurtured in the temples of Tamil Nadu in Southern India as a part of the daily worship.  Graceful movement, mime, and music contribute in equal measure to this traditional and beautiful dance. Speaking a universal language of gestures, replete with diverse moods and emotions and portraying rhythmic precision, the dance essentially brings to life the glorious sculptures of the temples as well as the mythology of the land. This dance is accompanied by classical South Indian or Carnatic music, while the rhythm is kept by the cymbals and the mridangam (horizontal drum). The dancer wears anklets of small bells to emphasize the rhythm. This style is one of the most ancient and arguably the best-known classical dance form of India.

In the word Bharata are the three components of all dancing. Bha denoting Bhava, or expression; Ra denoting Raga, or melody; and Ta denoting Tala, or rhythm. The word Natyam is a general term for theatrical dance.
Photo by Bipin Thakkar

Kuchipudi originated in the Kuchelapuram village in the state of Andra Pradesh in Southern India. Originally performed by men, Kuchipudi was intended as a dance drama requiring a set of characters, but has only recently evolved into a solo performance art as well. It shares many similarities with Bharatanatyam, but is distinguished by its flowing and rounded movement patterns, including more up and down movements, the sway of the torso and ribcage, and a more storytelling/dramatic interpretation of mythology. This emphasis on storytelling is punctuated by the artists singing and speaking along with the dance.

For more information and pictures go to:
http://ccrtindia.gov.in/kuchipudi.php

Odissi hails from the state of Orissa in Eastern India. The art form was kept alive through the Gotipuas and Maharis (temple dancers) who dedicated their art to the Divine. The characteristic feature of this style is a hip deflection, giving rise to the tribhanga or 3-bend posture of the body. Odissi is known for its lyrical and sinuous quality, and abounds with sculpturesque poses from the temples of Orissa. Odissi also is known for its performance of ashtapadis (poem of eight couplets) from Jayadeva’s Gita Govindam, which describes in exquisite Sanskrit poetry the complex relationship between Radha and Lord Krishna.

For more information and pictures go to:
http://ccrtindia.gov.in/odissi.php

Kathak finds its origins with the nomadic bards of ancient northern India, known as Kathakas, or story tellers. These bards, performing in village squares and temple courtyards, mostly specialized in recounting mythological and moral tales from the scriptures, and embellished their recitals with hand gestures and facial expressions. With the advent of Mughal culture, the themes and style of presentation gradually developed to fit the decorum of the court. Kathak technique is characterized by fast rhythmic footwork set to complex time cycles, as well as its numerous fast pirouettes. In addition, the solo kathak performance involves a high level of improvisation in both pure dance and expressional dance. Kathak has evolved over time into various schools, or gharanas, with the Lucknow, Banaras and Jaipur gharanas being the most famous.

For more information and pictures go to:
http://ccrtindia.gov.in/kathak.php

Mohiniattam, which is literally translated as the “dance of the enchantress,” comes from the state of Kerala in Southern India. The movements of the dancer represent the motion of Mohini, the enchantress, a disguise used by Lord Vishnu to lure the rakshasas, or evil demons, away from the nectar of immortality. Mohiniattam is characterized by slow, swaying movements of the upper body with legs placed in a stance similar to a plie position. The eyes also play an important role in accenting the direction of the movement. This dance form is notable for being performed only by women.

Kathakali also hails from the state of Kerala, and is a theater art performed primarily by men. Kathakali is a group presentation, in which dancers take various roles in performances traditionally based on themes from Hindu mythology, particularly the Ramayana and the Mahabharata. One of the most distinguishing features of Kathakali is its use of elaborate make-up, which creates the appearance of the dancers wearing a mask. The technique of Kathakali includes a highly developed language of gesture, through which the artist can convey whole sentences and stories. The body movements and footwork are very rigorous, and mastery of the art requires many years of vigorous training and development of flexibility.

Manipuri originates from the state of Manipur in Northeastern India. It has its roots in that state’s folk traditions and rituals, and often depicts scenes from the life of the god Krishna, including the raas-lila, or cosmic dance between Krishna and the gopi maidens. Unlike some of the other, more rhythmic classical forms, Manipuri is characterized by smooth and graceful movements, as well as swaying and twirling. Female roles are especially fluid in the arms and hands, while male roles tend to have more forceful and athletic movements. The dance may be accompanied by narrative chanting and choral singing.

For more information and pictures go to:
http://ccrtindia.gov.in/manipuri.php

Saatriya, from the northeastern state of Assam, is the most recent classical dance form recognized by the Sangeet Natak Akademi.  Attributed to the 15th-century saint-composer, Srimanta Sankaradeva, Sattriya is a group dance-drama for celibate monks to accompany his one-act plays. It is traditionally performed in the namghar, the prayer hall of the sattra – the Vaishnavite monasteries in Assam. Sattriya is accompanied by devotional music in local ragas known as borgeet, composed by Sankaradeva and other composers. Lord Krishna’s flute, hand cymbals and the khol (double-headed tuned drum) form the traditional orchestral accompaniment instrumentation.

For more information and pictures go to:
http://ccrtindia.gov.in/sattriya.php