On the evening of Sunday, March 3rd 2019, The School of Arts and Culture at the Mexican Heritage Plaza, San Jose, was the venue for an interesting portrayal of the life of one of America’s famous civil rights leaders, Cesar Chavez. What set this production apart was not only the object of the story, but the medium of storytelling. Cesar Chavez and his celebrated struggle on behalf of migrant farmworkers in California, was conveyed through the traditional Indian dance form of Bharatanatyam.
Presented by the Abhinaya Dance Company of San Jose, “Si Se Puede!”brought to light not only the echoes of those long ago struggles, but also placed today’s issues front and center for us to examine. In the current political environment, with the subject of Immigration – illegal or otherwise – taking centerstage; spotlighting Chavez’s struggles and successes seemed especially appropriate. Beneath the layers of music and movement, poetry and lyrics, the stage lights lit up an immigrant narrative made up of two separate cultures. And weaving through it all were the universal tenets of human rights, freedom and social justice. Abhinaya School of Dance, founded in 1980, is well known for originality in creative exploration. The recipient of several grants from the National Endowment for the Arts, state and city agencies, the dance company has deservedly earned a leading name for itself in the SF Bay area. Helmed by an accomplished dancer, teacher and choreographer Mythili Kumar, the company has until date staged over 50 original productions. Offering classes in San Jose and Monte Sereno, the school has 130 students who have graduated with their solo debut (arangetram) performances. Abhinaya has staged socially relevant productions in years past. “Gandhi the Mahatma in 1995 was the first of such projects that we staged. Our 2018 production ‘Stories of Justice’ featured the legacy of Martin Luther King. Jr – which included a 6 minute piece on Cesar Chavez,” says Artistic director Mythili Kumar. Her research revealed the fact that Chavez was greatly influenced by Gandhi’s successful non-violent resistance which helped India gain independence from British rule in 1947. She felt the time was ripe for delving deeper into Chavez’s life given the recent upheaval in the lives of immigrant workers all over America, Her goal is to educate and inspire the diverse Bay Area community about Cesar Chavez’s pioneering work, while also highlighting ongoing struggles that continue to be part of the lives of those who strive so hard to provide us with the very lifestyle that is denied them. Cesar Chavez’s quote from the 1960s is relevant even today – “It is ironic that those who till the soil, cultivate and harvest the fruits, vegetables and other foods that fill your tables with abundance have nothing left for themselves!”
Si Se Puede! – Yes, You Can! Abhinaya Dance Company’s first production in 2019, titled “Si, Se Puede” – which translates to mean “Yes, You Can!” – pays homage to the slogan made famous by the farmworkers under the leadership of Cesar Chavez in 1962. The program opened with dancers outfitted in traditional Bharatanatyam attire, dancing to a beautiful rendition of verses from the Bhagavad Gita. Stories of the demon king Kumbhakarna, Ravana and King Midas highlighted the central idea of greed as being the downfall of the human condition. Lord Krishna’s twin messages of Universal Love – “Vishwaprema”, and the victory of Truth – “Satyameva Jayate,” set the tone for the story of the man, the visionary, and the leader – Cesar Chavez. Cesar’s humble beginnings working the fields with his family showed him the harsher truths of life. He was forced to bear witness to abject poverty, hunger, mistreatment, ill health and poor living conditions while working as a migrant farm worker. Abhinaya’s dancers deftly led us through scene after scene showing families of itinerant farm laborers struggling under sweltering temperatures, facing immense hardship, leaving children with no opportunity to enjoy their childhoods. The soulful voice of Bay Area’s notable Carnatic music vocalists, Asha Ramesh, was ably supported by respected instrumentalists – Ravi Gutala (bols & tabla), Amit Ranganathan (mridangam & kanjira), Lakshmi Balasubramanya (violin), Ashwin Krishnakumar (flute) and Prasant Radhakrishnan (saxophone). Lending counterpoint were Ignacio Alvarez (guitar & vocals) and Gil Cruz (guitar) from the Trio Igalva group. Ignacio’s rendition of ‘De colores’ was especially poignant. Originally a traditional Spanish song sung during happy occasions, ‘De colores’ was adopted by the striking farm workers at their meetings, and it eventually became a symbol of hope for their resistance movement. Mr. Alvarez’s soft, gentle rendition brought to mind a thirst for beauty and kindness that all human beings yearn and strive for. Malavika Kumar Walia’s crisp nattuvangam added the perfect vigor to the famed UFW (United Farm Workers) march from Delano to Sacramento, bearing the distinctive flag of resistance. Likewise, Ravi Gutala’s sprightly rendition of bolsenhanced the scene where the striking workers were brutalized by law enforcers. Rasika Kumar’s narration provided continuity along with a backdrop of slides from that period in history.The final scene brought home the fact that the struggles of immigrants is not over yet. Mythili Kumar portrayed a Hispanic woman’s story as she lives with the constant fear of deportation. A normal day in her life with her children shadowed by fear, every time there is a knock on the door. Finally, the law comes calling and she is taken away. The twist came at the end of the scene where the woman wakes and realizes it is a nightmare. This is the reality that untold numbers face today.Abhinaya’s production shows us that fear lives among us and holds us in its clutches in today’s world, as it did in Cesar Chavez’s day. Will we have the courage to shed ourselves of the manacles of fear? Will we have the courage to say – Yes We Can? . 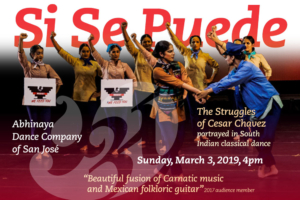