After the surpassing experience of Satpathy and Khan on Thursday evening,  what Drive East’s 2019 second program in San Francisco would provide? The two offerings did not pretend to classical format, if schooled in solid classical foundations.

Of the two Unfiltered with the Bharata Natyam-trained trio Rasika Kumar, Suhasra Sambarmoorthi and Nadhi Thekkek was the more intriguing to me; young professional women in differing settings, dealing with the overactive hormones and advances of men.

The trio are depicted rising in the morning, accomplishing their ablutions and then headed to their differing activities. For Rasika Kumar, she was seated behind a desk using a computer, the strike of her heel emphasizing the technical activity. Two or three times, she rises to greet visitors and direct them upstairs or into a special office. She also was called into the special office, apparently complimented, to which she smiles delightedly until the interaction becomes close by and intrusive.

Here the Bharata Natyam tradition of abhinaya and the expressive possibilities inherent in the padam format provided Kumar with all she needed to express the range of pleasure to surprise, disappointment, alarm, departure from the scene of the scene of advances, and the shaking realization of superior-inferior working consequences.

Suhasra Sambarmoorthi’s character appeared domestic, purchasing food and kitchen supplies for the home. One observed her returning and storing items from her grocery bags before preparing something for someone, whether an employer or a relative or husband unclear. Something missing from the offering;  Sambarmoorthi’s face as she flinched from a tirade made one realize just how arbitrary this unseen creature was. So extreme, it found her locked out, turning the house key futilely, knocking on the door for entry, her foot and bells marking the desperate effort.

Nadhi Thekkek came across as the most flirtatious of the three; it was not clear whether she had been invited by some long-time friend or relative to choose a dress to attend a special event. Nadhi sorted through several gowns on a rack, choosing one which pleased her enormously, although it was uncertain his reaction. She also tried on what seemed to be a pair of extreme shoes, clearly feeling she was smart as paint. Nadhi seemed predestined for trouble.

A party ensued, whether an event or a bar was uncertain. But she accepted one drink and became quite merry. After some equivocation, a second drink was offered, and it became clear it was a mickey. Nadhi awoke to find herself on the floor opposite where she had imbibed her mistake; she was misery personified. It did not seem she had been abducted, but she had been violated. I don’t know whether it is the medium or the skill of the exponent, but abhinaya and the Indian dance tradition can together magnify and convey misery like few styles of dance, abetted, of course, by the quality of the dancer.  One or two of the gestures might have been explained to us Western dullards to help heighten our appreciation of the dramatic events.

At one point, their backs to the audience, the trio looked at each other and touched gently. It was a brief, archetypal gesture of support, to me more touching than the assertions which followed.

The successive declarations, “I don’t deserve this; It’s not my fault,” each coming forward, and then inter-weaving, gave the trio space to move in Bharata Natyam style with punch and energy.

Rasika Kumar has been responsible for a number of choreographic innovations within the Bharata Natyam idiom. I reviewed earlier a solo performance  on Courage, exploring traditional Hindu myths and epics on the women in such tales and their responses; later on Gandhi, most recently on Martin Luther King.

Here, however, the three exponents schooled by three differing teachers, collaborated on the all too prevalent theme of women exploited in current society.

Their music was supplied them by Roopa Mahadevan who became the lead performer in the evening’s second half, appearing with the percussion whiz
Rohan Krishnamurthy plus two talented local artists, pianist and flutist Erica  Oda and violinist Sruti Sarawathy. 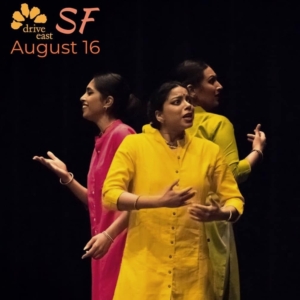